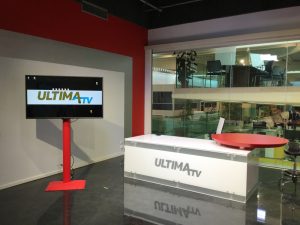 Italy is a country with many variegated local communities whose stories are not always reported by the large national news networks. This happens frequently in Sicily, an island in the south too often forgotten by the entire nation. With this in mind a famous and successful entrepreneur decided to invest in the creation of a completely new broadcasting station which narrates Sicilian local news and traditions. He called it Ultima TV and based it in Catania.

Since analogue switch-off the Italian local television market has been under strong pressure which has led to the bankruptcy of several broadcasters and over-stressed the rest of them. The transition to digital TV never brought the expected benefits and today the market is even affected by new viewer’s behaviours (e.g. TV everywhere, Catch-up TV) and by new distribution methods (OTT).

Investing in the creation of a completely new local television during these hard times is a revolutionary act that requires a perfect balance between costs and technologies.

The Ultima TV editor strongly believes in the economics behind high quality local news and decided to create a top-class broadcast infrastructure able to deliver high quality media contents through DTT and Internet.

Video Progetti, after analysing this customer’s needs, accepted the challenge with enthusiasm and provided an efficient and cost effective broadcast quality system able to satisfy all the high demanding customer requests.

In order to build a brand new top-class and cost-effective broadcast infrastructure, Video Progetti SI team created an optimized HD TV station able to function even in the most stressful situations. We successfully delivered the system by leveraging our specific knowledge of the overall workflows and activities implemented in every TV station, our proven experience in building broadcast systems and our long-term stable and profitable relationship with first class partners.

The TV station is composed of a master control room (MCR), a production control room (PCR), a studio theatre, a newscast studio, a newsroom which accommodates up to eleven journalists and four craft post production stations.

In only two months of highly intensive work Video Progetti built, tested and delivered the entire TV facility. Subsequently we trained the entire production team and assisted in operations during the first days of production.

Today Ultima TV is on air and is widely considered to be one of the most modern and efficient broadcast infrastructures in the entire Italian local TV market.

Ultima TV aims to give voice to Sicily’s major issues and reinforce a more widespread awareness of its traditions and culture. The news is narrated by famous anchors and a large network of correspondents who cover the entire island. Moreover every night Ultima TV produces live shows which are closely followed and extremely popular among Sicilians.

At Video Progetti we are proud to have been part of such a great editorial challenge and we are sure to continue in this established partnership with the aim of assisting in the future growth of Ultima TV.